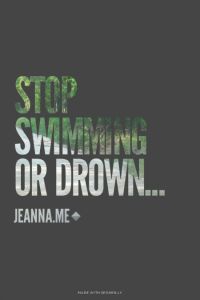 Once upon a time after a torrential rain 3 dogs of various sizes were playing on a small bridge on a gravel road called Keseman Avenue in rural Benton County.

This bridge has a tendency to be underwater after high rains.

This is the bridge: 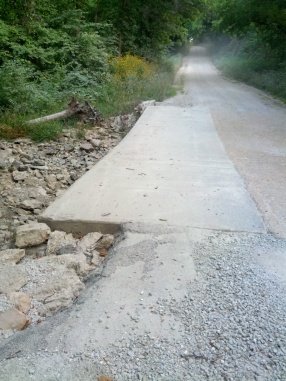 The smallest of the dogs was quite weak and was caught up in the rushing water and swept over the side of the bridge and into the creek. This was observed by two travelers on their way to Sedalia. The first traveler said, “Well I can’t just let a dog die.” The second traveler showed genuine concern but sat back and watched the “Good Samaritan” get out the car and walk towards the bridge. Bravely and slowly, our story’s Samaritan waded across the bridge in water that was mid-calf length on the 6’2” hero.

The slight yet tenacious little dog was paddling as hard as she could against the current. The dog knew that there was a previous moment on the bridge when everything was okay—so the dog paddled vigorously to get back to that “okay” spot.  No matter how hard the dog paddled there never seemed to be any progress.

The dog would paddle harder and seemingly get close enough to touch, but the dog did not have a hand to reach up with. The dog’s paws were too busy paddling to be available to grab—and the dog’s head was just out of reach.

The two other dogs hopped around in the background barking with excitement and seeming concern over this spectacle. The second traveler thought to herself,”Well, this is it, this is how he is going to die. How do I explain this?”

The dog’s head dipped under the water, re-emerged and then disappeared out of sight. The dog had surrendered to the current. The Samaritan’s arm lowered in disappointment. The Samaritan then lifted himself up with his arms and onto his knees. He searched the waters as they raged on around him.

The second traveler felt sad for the dog but grateful that her companion was not lost.

As the Samaritan began to stand up he noticed movement along the creek bank. Shaking with exhaustion, stressed, and soaking wet…the dog climbed up onto the erosion-carved edge of the creek among broken tree limbs and leaves. The Samaritan rushed over to the trembling creature and picked her up. He cradled her gently in his arms as he slowly walked across the water –covered bridge.

I have been the 2 strong dogs…

I have been the Samaritan…

I have been the second traveler…

I have been the weaker dog…

I am completely covered in grace.

I am a child of God, a new creation; morning by morning new mercies I see.

I am a work in progress, I am not perfect, but I am God’s masterpiece.

For we are God’s masterpiece. He has created us anew in Christ Jesus, so we can do the good things he planned for us long ago. Ephesians 2:10

This is a true story.

This is the offspring of the dog that was rescued: