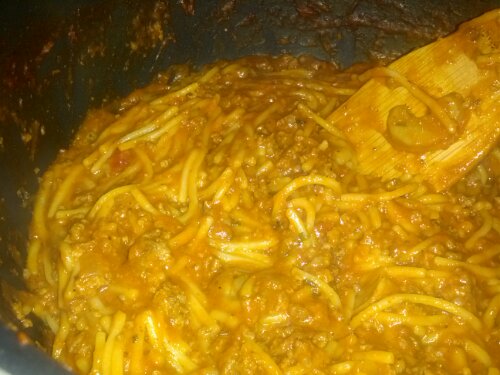 According to what I’ve read about this one pot spaghetti technique on Pinterest and various blogs, it is an easy go-to option for those days you’re feeling lazy. Well I’m feeling a bit lazy today so it’s a great time to try something new and possibly more labor intensive. I never attempted to recreate any recipe because the urge struck me on a whim and I didn’t bother to research an actual recipe before starting. Mid way
through my whim I wished I had revisited those sites.
This is what I did…
First I browned a pound of ground chuck, I did not even strain the meat, embracing the laziness. There wasn’t much fat anyway.
Then I added a jar of prepared pasta sauce Prego Roasted Garlic Parmesan. My suspicions begin but I push forward. I added about a cup of water so it would appear to sustain the pasta once added.
I then removed some dry spaghetti from the box and broke the pieces in half and added them to the pot.  I stirred as I added more broken pieces to the pot. I used about 8 ounces of dry spaghetti.  Then I added another cup of water, boiling everything on low heat. Worried I would dilute the sauce flavor, I added Italian seasoning periodically throughout the cooking process.
It was at this point that I consulted the internet for tips.  I didn’t learn much that would help me at this point because apparently I had already made significant mistakes.
Increasingly irritated with how long it was taking for the pasta to absorb the sauce, I added another cup of water.
At this point I’m realizing that boiling the pasta in water first would have been much faster.
So I stand over the pot boiling it on low heat for over 20 minutes. Perhaps a recipe would have suggested a higher cooking temperature? Occasionally I would cover the pot in some grand illusion that I was speeding up the process.  Throughout these 20 minutes I would bite test for al dente-ness. When chewing time decreased and tastiness increased I decided it was finished.
It tastes different than my normal spaghetti (sauce on top of buttered noodles). It wasn’t better or worse in my opinion. Just different.
The pasta definitely absorbed the sauce’s flavor. I enjoyed the change although it was not easier and not the lazy choice.
My kids enjoyed second helpings and my husband *gasp* said he liked it better than my normal spaghetti.
I will probably only repeat this on a whim again…or if someone steals all of my pots.

← Forgive
Out of the mouths of babes… →